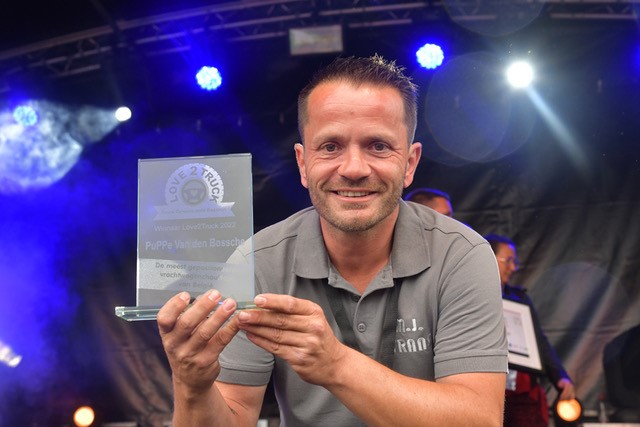 Brussels, 26 June 2022 – Davy Van den Bossche (43) is the winner of the third Love2Truck award. Davy is from Zottegem, and has been driving trucks for over 20 years. He won over both the audience and the jury with the strength of his engagement with the sector: the frequent blind spot sessions he teaches, and the two successful Truck Runs he has organized, are just two examples of that engagement.

Love2Truck is an initiative sponsored by ten companies* that are active in and for the transport world. The campaign is designed to find as many motivated drivers as possible, but also, on the basis of the many positive stories, to get people excited about the profession of truck driver. A total of six Belgian truck drivers were selected as the finalists: three Dutch-speaking and three French-speaking. Of these, Davy Van den Bossche emerged as the winner of both the audience vote and the decision of the competition jury.

Not just a job, but a passion

Davy, known as PuPPe to his friends, drives for M.J.-Trans. But he also helps out his employer with invoicing and elsewhere in the organisation wherever he can. He’s father to a son (16) and stepdad to a daughter (13). Simply put, Davy oozes passion for his field. “As a kid, I rode with my father when he drove his truck, and I got my license as soon as I possibly could. There’s nothing I like better than sitting back in that big, beautiful truck. I generally work 12 to 14 hours a day, and my alarm goes off at 3 in the morning. But it never feels like working! I love every minute in my truck. It’s a job you really have to love doing, which makes it not so much a job, but a passion,” says Davy.

For Davy, safety in traffic is one of his primary concerns. That’s why he does everything he can to make as many people as possible aware of the dangers of the blind spot. For a little while now, he’s been talking about those dangers in school classrooms. It turns out that a great many children are completely unaware of when a truck driver can’t see them. And when Davy has the chance to explain it to children, and even get their teachers thinking about it, it simply makes him feel great.

Truck driver with a heart of gold

His passion and his generosity have led him to organize two Truck Runs to date. “My passions are my family, my truck, and kids who have things tough. For them, I’ve managed to put on two Truck Runs so far: one with 80 trucks and one with 200, from Zottegem to Diksmuide. The way you can make a child so happy with your truck is just magical!” Davy says with pride.

Go4Logistics wishes Davy every success as new ambassador for the sector!

Do you really wish to opt-out?